For over 10 years, Karla DeSimone has been going on wheelchair distributions in Vietnam with our distribution partner, Giving It Back To Kids (GIBTK). Throughout this time, Karla has been able to keep in touch with friends she has made—and make new friends along the way.

It was at one of those early wheelchair distributions that I met Trung, who is now 22. Thanks to the GIBTK staff, I have gratefully been able to keep in touch and visit him each time I return to Vietnam.

One thing that has not changed is his smile. 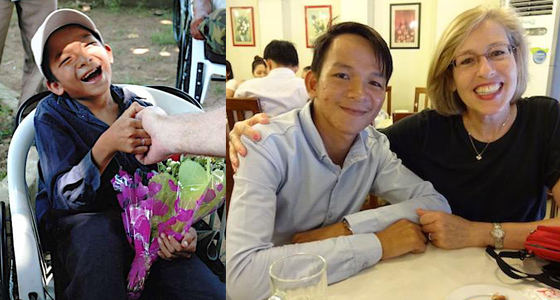 This trip, I asked if Trung would like to accompany Hieu (a GIBTK staff member) and me to distribute a wheelchair. Trung readily agreed. As we drove in a cab to the home of the wheelchair recipient, Hieu translated for us so that Trung and I could catch up.

The cab driver was listening.

At some point in the conversation, the cab driver began to speak with Hieu and told him that he was so inspired by the wheelchair distribution program and my relationship with Trung, he would accept only half of his fare for driving us to the distribution.

I was so touched by his generosity that my eyes filled up with tears. I believe this confirms that when people see true generosity in action, they too want to participate.

Upon the arrival at the home of the wheelchair participant, our cab driver—and now, new friend—carried the box with the wheelchair right up to the home… stayed with us during the interview… and even helped Hieu assemble the wheelchair! 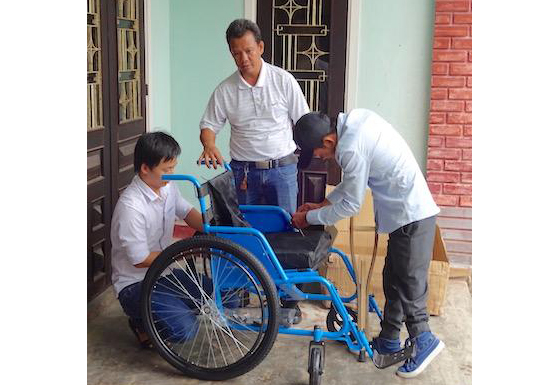 (From left to right) Hieu, the cab driver, and Trung assemble a new GEN_3 wheelchair.

As one of our supporters once said, there’s “a multiplying factor” with the impact a wheelchair makes. Karla’s story illustrates this ripple effect—how the simple gift of one wheelchair can affect more than just one life, for years to come.

In a few weeks, we’ll share the story of Giao, the man who received the wheelchair from Karla, Trung, Hieu, and the cab driver. Until then, have a wonderful weekend.

Transforming lives through the gift of mobility. View all posts by FreeWheelchairMission